Who can you trust

Cover up?  Who do you trust?

My personal thoughts are as follows.  They are my thoughts which span 25 years of questioning how my 16 year old son could vanish off the face of the earth.

When Damien went missing we reported his disappearance to the police, because that’s what you do, right? We felt very hopeful that we would get support and a result once they were on the job.  But it does not work like that.

First, we as a family were scrutinized, but we didn’t realize at the time.  We did wonder why they were spending a lot of time interviewing us and our kids and why they were not out searching.  But, being ignorant of any police procedure we thought this was leading somewhere and that surely, while we were being scrutinized, surely they were also out searching?  Erm, no!  So we lost valuable time.  It was at the suggestion of a dear friend that we should forget the bastards (her words) and get out and look ourselves.

That was the best advice I got and I am glad I followed it because, if I hadn’t, we would never have uncovered Damien’s movements that night.  Nothing would have been done by the police.  We knocked on doors and we found people who remembered seeing him and we discovered the video in a chip shop showing him talking to a group of army guys who were visiting the Island.  We made a fuss, asked questions and we were treated like a nuisance by police who obviously did not like the questions we asked.  They did not want to look for him and said he had gone off.  One even told me he was old enough to do what he wanted.  Damien was 16.  The police said they thought he was 19.  Big mistake on their part.

This set the rot into the case, day one.  Blaming Damien for being a young boy, because boys do this.  Accusing him of being a runaway and a timewaster and not a priority.

Mistakes just kept coming like the loss of evidence.  The CCTV of the High Street showing Damien walking along mysteriously disappeared.  They blew that off like it did not matter at all.  Justified it by saying there was nothing of importance on that CCTV.  Not true - my sons last movements were on that CCTV.

Could there be something that would have implicated either the police themselves or someone closely related to the police?  As anyone on the Isle of Wight knows, everyone is connected.  So what was there to hide.  The more I find out about connections between parties of interest, the more I am suspicious and start to believe the locals who say there was a cover up.

The army men on the chip shop video were not identified for 14 years, despite promises that they would be looked for, nothing was done for 14 years. 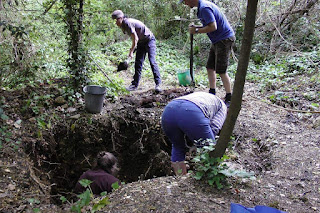 We have been given a location where Damien may be buried, but the police refuse to look – why?  Cost, manpower and if Damien was found it would not be looking good for them.

I believe that when Damien is found his remains will tell all and that day is coming.

Posted by Valerie Nettles at 9:08 AM