When Damien went missing we soon became very frustrated at the lack of action taken by the police.  In hindsight I feel that the day I reported him missing was the day they made up their minds how this case would go.  Dismissed.  I was informed all teenage boys “go off for a funny five minutes.”  “He will be home by tea-time”. “Gone off to lick his wounds.”  But none of this applied to Damien and we knew as a family he wouldn’t go off and not at least tell someone.  He couldn’t resist telling people where he was and what he was doing.

The whole thing was out of character.  But we were not heard and the running away idea was perpetuated as police told locals he had “run away “swam across The Solent” which is the stretch of water between the Isle of Wight and England southern coastline. Ludicrous at best.  No he wouldn’t have done this.  Police tried to put words in the mouths of his teen friends that he was depressed and a risk taker. No he wasn’t.  One officer declared he drowned and floated off to the Hook of Holland.  On what information did they base this?  Rumor mongering.  Setting in the rot that would eventually render this case virtually unsolvable.

The rumor and speculation began in earnest on the Isle of Wight until the police were unable to sift facts from fiction.  Damien became a Urban Legend.

Although I welcomed people to contact police or myself with any information it was hard.  People were afraid of repercussions on a small island or didn’t trust police and wouldn’t go on record which rendered that information useless.

All of this was bad enough but unfortunately part of the territory with a case like this.  One person suggested something and another repeated it slightly differently and before we knew it a whole story re-circulated back as another possible line of enquiry.  The police ignored most of it as regurgitated gossip.  Some of it they couldn’t ignore and had to act on it.

Then there is the added distress of finding a body/human remains. I cannot even describe the emotions this elicits in the family.  Initially, police informed us of such finds and let us know the results.  But after a few years they failed to let us know.  We hear about it these days on Facebook as good and supportive followers of Damien’s case let us know when they hear of remains found.  I have to chase the police for some reassurance it’s not Damien.  It is hard to hear the comments, theories and innuendo regarding my own sons possible demise.

Families do read reports and articles about their missing loved ones and hearing those comments is very disheartening.  But it goes with the territory. My son is urban legend and his disappearance taken on a life of its own.  We can’t control the internet.  If we approve an article that’s fine but sometimes un-corroborated theories and mistakes are made, which once on the internet, are difficult to repair.  They are woven into the narrative.  It’s almost impossible to unpick the damage.

Posted by Valerie Nettles at 6:35 AM No comments:

The stars shine bright in the early morning light.  As ever, my mind wanders to you Damien as I ponder your fate.  There is no way to know how you left us, yet.  Memories flood back in monotone like an old celluloid cine film.  Your life, fast forwarding through my mind with snippets of happy times, birthdays, Christmas, and laughter.  The film fizzles, melts, all we hear is the whirring of an empty reel, a life unfinished, there is nothing but silence now as the the switch is flipped. We are left without an ending except visions that haunt our quiet moments. We have been on a rollercoaster ride for so many years. I know that somewhere under those stars you wait for us.  You know we are always looking for you and one day I am sure we will find you.  We have to.

But time is running out. 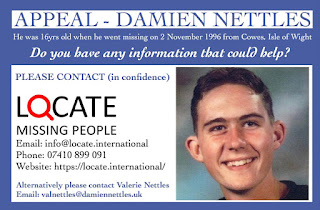 Posted by Valerie Nettles at 4:21 AM No comments: