No Justice for Damien

There has been no justice for Damien.  He went out one night, waved bye mum, see you later.  I never saw him again. It’s all been said – rumors and speculation.  Police failures. Too late - some arrests and a major search proved fruitless.  A documentary opened up more questions than answers.  Were there people involved or was it gossip based on known criminality by these individuals who allegedly bragged they knew something? The police refused to comment or assist with the television film crew.  Was it because they knew what a poor job they did overall?

A few officers admitted to me it was not handled well.  Some apologized for it.  Some were belligerent.  Its now as a cold case.  Minimal communications from police who I am sure want it all to go away. 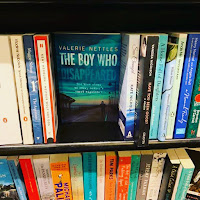 I wrote my book to put it into our own words what we suffered through.  We own this pain.
We are not a unique family as there are so very many like us suffering the loss of a loved one who has gone missing, without an active engaged police force to stay focused on the case.  Too many other crimes that claim their time.  The missing issue, it may be assumed, are people walking away from their lives or who are in dire circumstances so leave home, which happens too frequently.  But  many are out for the evening, with friends, part company and vanish.  Those are the hardest to quantify.  Police make assumptions and valuable time is lost.  Many are found to have drowned due to proximity to canals or rivers or the sea.  Others turn out to be murdered or suspected murder.  Many cases are left  languishing on cold case shelves as unfinished business.   Families left behind to cope are living a life sentence of ambiguous loss.
Website:  www.damiennettles.uk