I think this supports my past claims that they are just not interested in moving this case forward.  It is like pulling teeth to get any response from them, any of them.  This type of poor policing adds to the utter contempt and frustration I have developed over the years I have dealt with police.

Total disappointment all along the way.  It never improves. 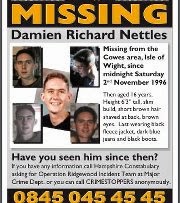 Posted by Valerie Nettles at 9:24 AM No comments:

Cover up?  Who do you trust?

My personal thoughts are as follows.  They are my thoughts which span 18 years of questioning how my 16 year old son could vanish off the face of the earth.

When Damien went missing we reported his disappearance to the police, because that’s what you do, right?  We felt very hopeful that we would get support and a result once they were on the job.  But it does not work like that.

First, we as a family were scrutinized, but we didn’t realize at the time.  We did wonder why they were spending a lot of time interviewing us and our kids and why they were not out searching.  But, being ignorant of any police procedure we thought this was leading somewhere and that surely, while we were being scrutinized, surely they were also out searching?  Erm, no!  So we lost valuable time.  It was at the suggestion of a dear friend that we should forget the bastards (her words) and get out and look ourselves.

That was the best advice I got and I am glad I followed it because, if I hadn’t, we would never have uncovered Damien’s movements that night.  Nothing would have been done by the police.  We knocked on doors and we found people who remembered seeing him and we discovered the video in a chip shop showing him talking to a group of army guys who were visiting the Island.  We made a fuss, asked questions and we were treated like a nuisance by police who obviously did not like the questions we asked.  They did not want to look for him and said he had gone off.  One even told me he was old enough to do what he wanted.  Damien was 16.  The police said they thought he was 19.  Big mistake on their part. 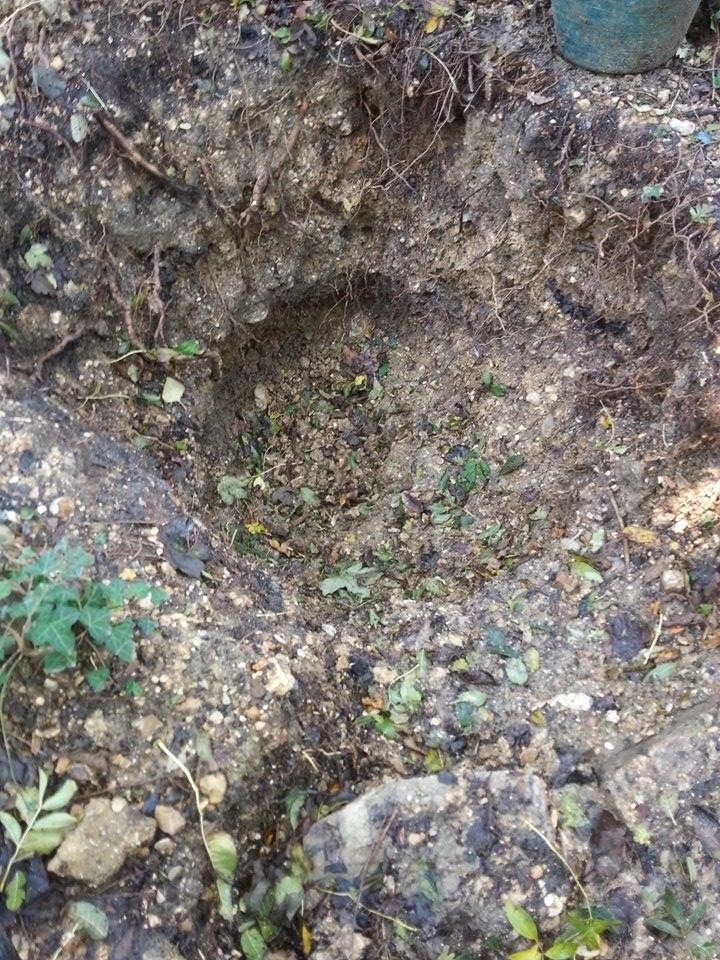 Mistakes just kept coming like the loss of evidence.  The CCTV of the High Street showing Damien walking along mysteriously disappeared.  They blew that off like it did not matter at all.  Justified it by saying there was nothing of importance on that CCTV.  Liars.

I think there was something that would have implicated either the police themselves or someone closely related to the police.  As anyone on the Isle of Wight knows, everyone is connected.  So what was there to hide.  The more I find out about connections between parties of interest, the more I am suspicious that there has been a big cover up.

The army men on the chip shop video were not identified for 14 years, despite promises that they would be looked for, nothing was done for 14 years.

No search was done of any scale until 14 years later.

No arrests were made until 14 years later.

All too late!
We have been given a location where Damien may be buried, but the police refuse to look – why?
I believe that when Damien is found his remains will tell all and that day is coming.

The Night I last saw you
You were in good spirits.  I didn’t make a fuss when you walked out to go to your pals house.  It was like any other time you were going to go and hang out with them.  You were eager to go and see your friends who you had not seen for the past week.  You had been away over half term, up to Suffolk, to see a young girl you had met in the summer and who you were very keen on.  So you had arranged to meet and see your friends and catch up before school began again on Monday.  So we spent the day doing family shopping.  You bought guitar stings and a guitar book.  You had a gift certificate from school for doing well on your exams and you bought a book.  You loved your guitars.  They sit in my room now and I look at them and remember your passion for your music.  That afternoon, when you had bought your book, I had for once decided that I would leave you and Dad and your brother James to finish shopping and I would treat myself, so I went to the hairdresser and spent some time and money on me for once.  It was a little luxury.  I didn’t know that while I was spending time at the hairdresser that I missed spending time with you.  I didn’t know.  When I got home it was gone 5pm and I had taken the bus home and walked a fair way to get home.  I was tired.  I didn’t spend much time with you that evening.  I didn’t know you would vanish.  You ate your dinner.  Fish and chips and you asked Daddy to drive you to Chris house.  So off you went with Dad and you stood at the living room door, filling the space with your height, and with your lovely sweet face you smiled and said you were going out.  I asked you to be home at 10.30 pm., which seemed reasonable, but you pleaded to stay out a bit later and I said okay, no later than midnight.  I wasn’t worried or concerned really, you were just going into Cowes like any other night out.  You were very tall, about 6’ 4”.   What was there to worry about.  Obviously I was always aware of the dangers but couldn’t wrap you in cotton wool all your life and had to let you go and trust you.  So off you went smiling and with that lope of yours on your long legs, off you went through the door saying ‘bye Mum, see you later’ and as usual I always said be careful.  I never saw you again Damien.

I regret that evening every day of my life.  I wish I had spent more time with you.  Hugged you and touched your cheek.  Wish I had listened more to stuff you chatted on about.  Wish that I could have been a better parent and been more there for you.  I wish I hadn’t just let you stride out of my life waving innocently  at me with those beautiful eyes twinkling with mischief.  I wish I could have just stopped and listened to that inner voice when I relented and agreed you could come home late.  I wish that I had stuck to my guns and the 10.30 pm curfew.  But I wasn’t paying enough attention you see.  I had wanted to spend a little time just on me doing what I wanted to do.  I failed you because if I had not wanted to relax and have a little me time I might have listened to my inner voice.  I regret that I did not be the parent I should have been and put your safety first by ensuring you were safe.  Dad said he told you when he dropped you off that you should call if you needed a lift home and he would come and get you.  I thought you were okay, safe.  That you would work out if you were staying the night as you often did at your pals house.  I knew you would let me know as you normally would.  I didn’t know you were being murdered while I slept.  Did you cry for me? Did you call for Daddy?  Were you alone and frightened and hurt?  You must have been petrified and alarmed that this was happening to you.  I wish I could have stopped it all happening by being a better mother and making sure you were home in time.  I am so so sorry Damien, my light and my heart. 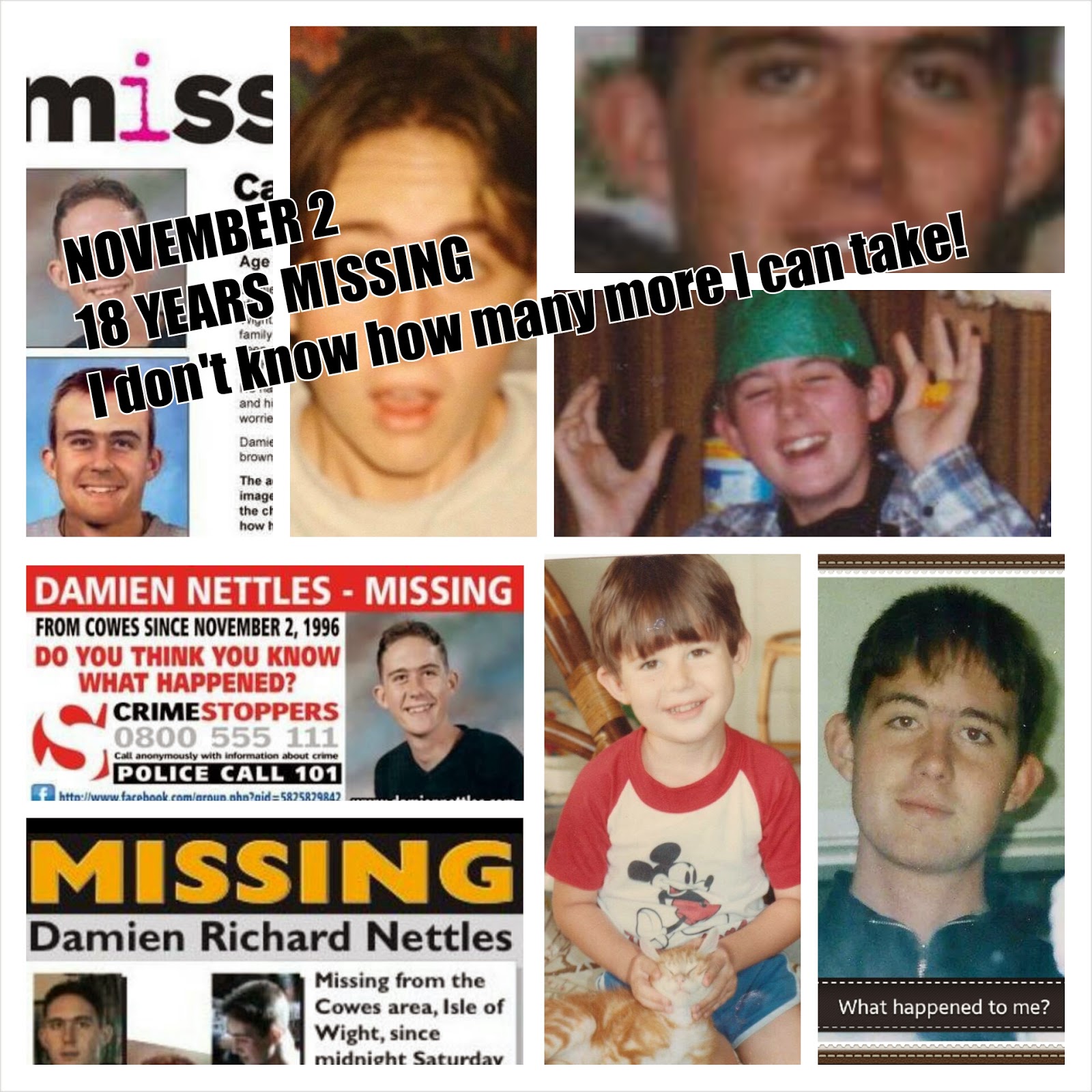 Posted by Valerie Nettles at 7:09 PM No comments: