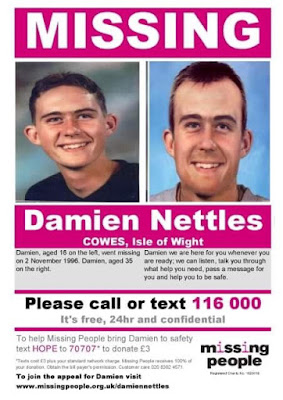 I am weary of armchair detectives and judgmental comments about Damien being out late. I really should not read comments, but there again, I have nothing to hide and can appreciate people will speculate.  He wasn’t given permission to be roaming the streets he was given permission to be at his friends house until such time he called us or stayed over.  We don’t have any excuses other than we thought he was safe enough with his friends.  If we could have foreseen something like this happening, well, hindsight is a fine thing.  Beat myself up every day.

Some people concluded the police have done enough - what I can tell you is they admit they (Police) made mistakes in the early days when it mattered.  Try putting yourselves in our situation knowing your life could have been much different had the police done it right in the first place.  Evidence tossed aside and not looked into when it could have gained results.  We feel let down.

We have speculation turned into Chinese whispers blurring facts.  Damien is an urban legend.   But he is my son, a loved a cherished child.  One wrong night out and we are left bereft but unable to lay him to rest or even know if he is really dead.  If he died,  how did he die, and did he cry for us?  Was it painful.  We hear the stories about being stuck like a pig with a pitch fork - being hit over the head - choking on his own vomit - his beautiful body burned - being cut up and fed to pigs or put into lobster pots. And more.

We do need to know and are prepared to hear the truth once and for all.  The truth is all we want.  To know the truth would be far better than hearing all the other speculative comments.

Damien was a lovely lad, life full of promise.  Was he perfect - yes.  And no.  He was a 16 year old boy who was learning about life much like most of his peers.  Was he gullible? Probably not as street smart as some. He was a good person and I still hear from people who tell me of his kindness and how he helped them at times.

He didn’t deserve to be dismissed by police and brushed under the Council carpet who didn’t want it mentioned during the holidays in case it ‘scared off summer visitors.’  God help those people who successfully thwarted this flawed case due to their inaction's.

Please help us make Damien's Law a reality so this does not happen to another family!

Posted by Valerie Nettles at 5:54 AM