Watch this space
I had a colleague ask me what that meant.  I didn’t realize not everyone understands that saying.  But I guess I assume and one should not assume anything, I have learned.
It has been a frustrating year “watch this space kind of year” and seen a lot of hope dashed onto the rocks.  We started a uk.gov petition asking for Damien’s case to be given extra funding to bring it in line with other high profile cases.  Despite a marathon spurt towards the end, failed to get enough to make it to a Parliamentary mention. 7K in 6 months, not enough.
Over the years I observed how funding & publicity for missing cases is skewed at times. The publicity for young males going missing is typically less noteworthy as young females.  Young men, it is assumed, are out on the town and it’s acceptable for them to be off the radar while they do what boys do.  Girls on the other hand set off all the alarm bells.  Check out the report available online Men Missing on a Night out by Geoff Newiss and Portsmouth University. 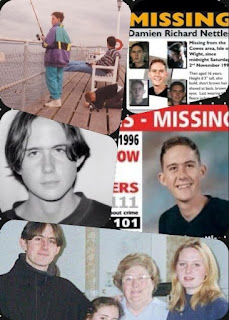 In late 2016 I set forth some points on the subject, I called it Damien’s Law.  I set up a new petition to ask the government for better risk assessment when young males especially go missing.  Better case management.  Better treatment of families left behind to cope.  More partnership between agencies involved in a missing case to ensure nobody falls through the cracks.  It’s my hope for a lasting legacy to Damien.  That he did not disappear and our family did not languish in ambiguous loss for nothing.  My hope would be for Damien to be associated with something that would have meaning for future missing cases and make a difference.  Future cases would not be ignored and left until the passage of time becomes too wide to broach.  Left to chance.  We teamed up with Charlie Hedges of Charlie Hedges Advisory who envisions a Center of Expertise for Missing People.   We are also supported my renowned Criminologist Dr. Elizabeth Yardley, Center for Applied Criminology @ Birmingham University in UK.  Professionals including Missing People .  All experts who ascribe to improving the plight of the missing and issues that surround it.
In late 2016 I submitted another complaint to Hampshire Constabulary regarding poor policing and lack of communication; lack of integrity; lack of compassion; lack of clarity.  I also addressed several specific areas where I felt they fell short.  The initial response from the police was to pass this to IPCC as they recognized a loss of faith in their abilities by me.  However, the IPCC handed the complaint back to Hampshire Constabulary.  After some months Hampshire Constabularies response was that some aspects of the complaints were upheld but others were not.  Passage of time, personnel moved on or retired.  Not all the case notes were transcribed from paper to HOLMES database when he was added to Major Crimes to investigate and placed on the HOLMES database.  I appealed these points to IPCC, who then accepted the appeal.  However, they failed to uphold my concerns.  Police apologized to me for shortcomings, poor police work and ensured me things are improved.  My Damien was a practice piece then?  I still see gross negligence happening in missing cases.   I am not convinced things are much better at all.
This has been a depressing time.  The public have supported me and have been the wind beneath my wings.  But it’s not looking hopeful for enough support to make any difference and my hope is fading for a lasting legacy for my son.
As I get older I am more acutely aware that time is ticking and that I may never see any result explaining what happened to Damien.  I have, like many other mothers and family members, spent countless years hashing and re-hashing the movements and every small bit of information, good and bad, that comes my way.  Begging for attention to my son’s case.  Pleading with those who might have any idea.  I have gone to extremes I never imagined I would ever go to look for my son.  It’s emotionally draining and it is physically debilitating to keep it up day after day.  When I try to rest, something comes up to propel me along again.  It is relentless.  The alternative will be to stop and let Damien fade away for good and I can’t imagine doing that any more that I could turn my back on my surviving children when they are in need.
Damien’s Law

Posted by Valerie Nettles at 1:13 PM